Last weekend we had a full house when Dave Osmond and friends (Elizabeth, Kate and Velcro) descended on us after completing the Tour of New Zealand (South Island). We had actually bumped in to them in the airport in Sydney on our way back from Canberra as they were flying over to start in Invercargill. They did very well in the race, coming 8th overall and placing very highly in another category. Poor Elizabeth had a bit of a crash on one of the final stages and had lots of scrapes and bruises and a cracked helmet to show for it.

Elizabeth and Kate had not been to New Zealand before, so it was all new and different. And luckily for them the weather was great for them all week. So they probably have the wrong impression of NZ - or at least Wellington as there was barely any wind.

Mifi the cat loved Velcro who would let her sit on his lap as he pet her for hours. Safi also like to share the couch with Kate overnight. The house feels very empty now with just Aaron and I and the cats.
Posted by Aaron at 9:29 PM No comments:

We haven't been back to Canberra for a few years and we decided to go back for Easter to catch up with friends. Canberra has changed quite a bit since we left over 5 years ago. They have had lots of rain this summer, in fact lots of rain over the last few years. So the forests are finally growing back after all the fires in 2003. It was looking very lush. 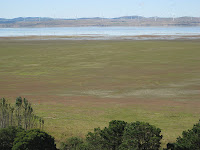 There was even water in Lake George
There was also lots of new buildings and suburbs.......
Aaron did some mountain biking - riding some of the old tracks and lots and lots of new ones.... 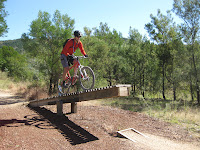 Aaron riding one of the new see-saws in the playground at Mt Stromlo
It was great to also just hang out with old friends - usually eating and drinking. 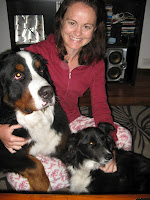 Louisa, Big Bear (Bernese mountain dog) and Little Sweep!
Macca has been building a wood fired oven in his back yard and treated us to some home made wood fired pizzas. It will be hard to go back to my home made pizzas. 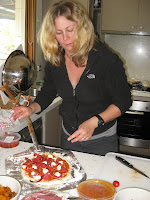 Lisa making one of the many pizzas 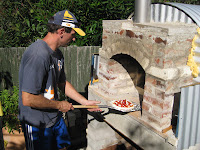 Macca putting the pizza in the wood fired oven
Louisa is now the Ranger in charge out at Namadgi National Park. She took me out for a day in the park. We had great weather as we drove around the park checking the camp sites and the traps for feral animals. It was really great to get behind the scenes and I have new appreciation for how hard Rangers work. 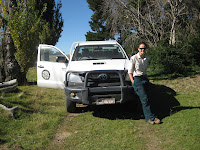 Louisa with her ranger vehicle 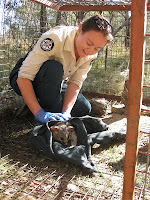 Louisa releasing some possums trapped in a pig trap - wild pigs cause lots of damage in the park. They caught a pig in the trap the next day. Keep up the good work Louisa.
Posted by Helen at 7:58 PM No comments: