There are lots of mountain bike tracks around Nelson. We decided to warm up with Codgers mountain biking park. We rode up to the top of Sharlands Hill and then descended down Firball, then did a couple of loops around on other tracks.

We also went and checked out the mountain bike tracks at Kaiteriteri, up near the Abel Tasman National Park, and then cooled off with a dip at the beach.


Aaron now has a copy of the latest tracks around Nelson, so I think we will be back to try out a few more in the future.
Posted by Aaron at 4:51 PM No comments:

We wanted to walk up Mt Arthur in Kahurangi National Park, which supposedly looks a little bit like Mt Owen (which we walked up in November 2011). The weather forecast suggested the clouds might clear off the top of Mt Arthur by the middle of the afternoon, so initially we headed along the valley and checked out the rock shelters. They have built bunks and a hut up under the rock shelters at Gridiron Gulch. 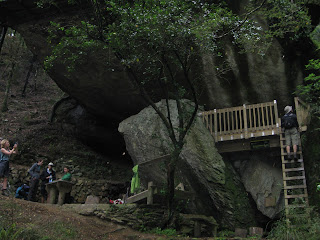 After lunch we headed up towards Mt Arthur Hut. We soon found ourselves walking in the clouds and it was hard to see the next trail marker at times. The forest up high was very different, with lots of mountain cabbage trees. We came across a woman tracking the 12 kiwi that were released in the area a couple of years ago. She told us that one of them had just had a chick. We also came across one of the endemic carnivorous snails. 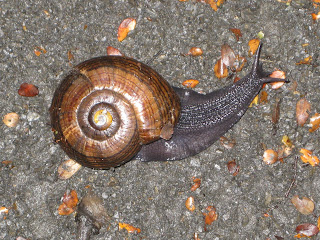 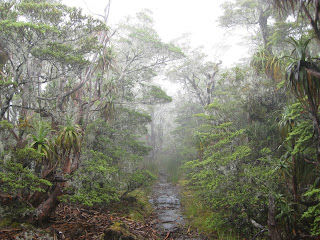 Forest in the cloud 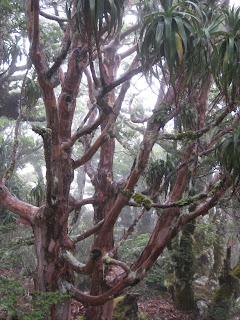 We got to the hut and decided there was no point in going up to the top as you wouldn't have been able to see anything. We'll have to come back and try again another time. 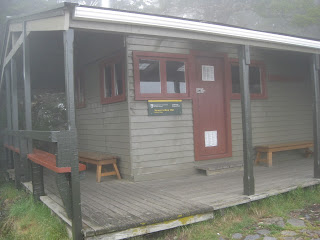 Mt Arthur Hut
Posted by Aaron at 4:38 PM No comments:

More work in the garden

After months of planning and replanning after the recent Te Maari eruptions on Tongariro, we headed up to the centre of the north island to do this great walk for several of the rangers Silver Duke of Edinburgh practise expedition. I had been monitoring the weather all week and the weather forecast was looking good. We started at Whakapapa and headed up the Taranaki Falls track, then the Tama Lakes track, then continued over to Waihohunu Hut for the first night. It was hot, with no shade.... the girls were complaining, the last few tramps they have done, were cool and damp. We were slapping on the sunscreen, but we all managed to miss little spots and get sunburn - not great on the first day. It was nice to reach the hut and head down to the river to cool off. After dinner, sitting out on the deck, we set up the radio and checked the weather forecast - hot and dry for the next day. 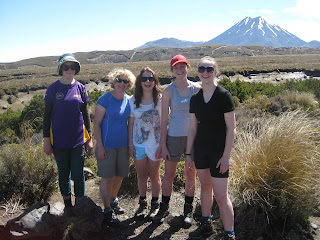 Bryony, Kerry (Jess's mum and the driver for the weekend), Jess, Jo, Marina 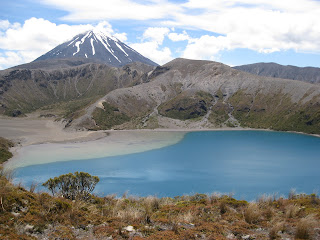 Lower Tama Lake with Ngarahoe in the background 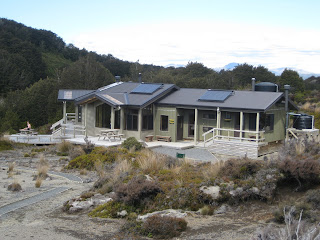 The new and rather fancy Waihohunu Hut 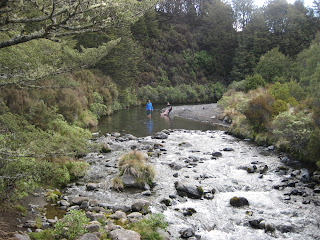 Cooling off in the river

The second day was relatively short, so we had a relaxed morning and set off for Oturere Hut around 10am. On the eastern side of the mountains you can tell you are in the rain shadow, it was very dry and you felt like you were walking in a desert. The smell of sulphur regularly wafted over us from the active vents on the volcanoes. It was quite potent at times. Then we climbed up on to a large, blocky, lava flow and arrived at the hut.   The hut was close to a waterfall and I walked down to the water to cool off. After dinner and a radio call,  warning us that the weather would close in late the next day, we had an amazing sunset. 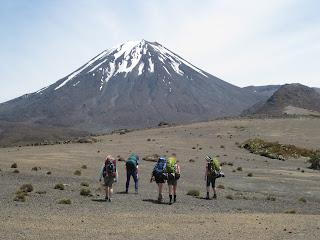 Walking across the desert 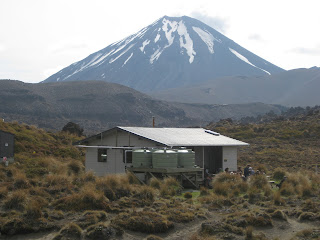 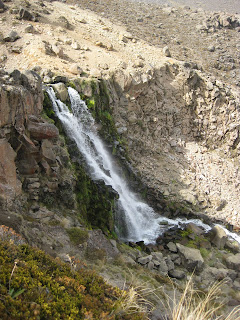 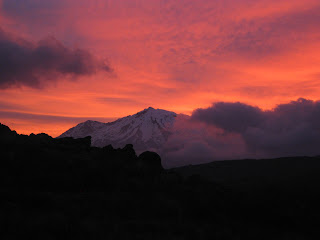 The next morning we woke up early and got going, in the hope we would finish the tramp at Mangetepopo  car park before the weather closed in. It was significantly cooler, which made the climb up to Emerald lakes and then on to Red Crater much more bearable. The Red Crater climb was up a scree slope, which was quite energy sapping with two steps forward, one step back. It was very windy on the top and trying to rain, so we had a quick snack and continued down. This part of the Tongariro Crossing is open to day walkers and was very busy with tourists. Because it was cool we stopped a lot less and finished the tramp a little earlier than expected. Only a few blisters, but otherwise very happy, tired girls. 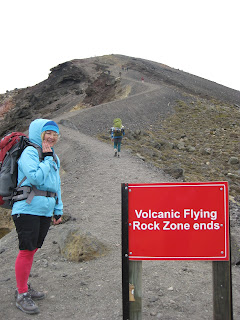 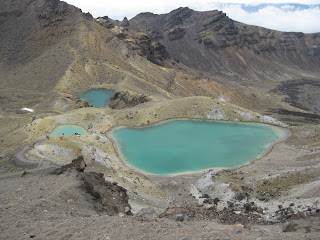 Looking back down on the Emerald Lakes 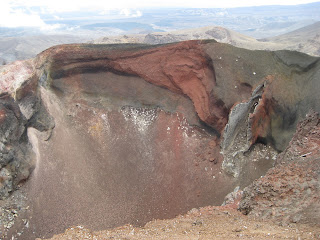 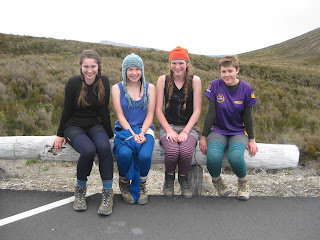 They must have had fun - they were already planning their Silver Final Expedition in the car on the way home. They want to do the Abel Tasman in the South Island.

Jo (the other ranger leader) organised a trip to the beach for the rangers as an end of the year chill out. So we headed out there on Friday night, in a rather dramatic hail storm - not quite what we had in mind. As it was the beach we had to have fish and chips on the Friday night - we just had to eat it inside. Saturday we were woken very early by a rather large earthquake and then went back to bed and had a nice sleep in. The weather finally improved by the afternoon and we headed down to the beach to boogie board in the surf. The water was surprisingly warm and we stayed in the water for a couple of hours. Saturday night the girls helped make a fancy dinner and we all got dressed up. On Sunday we tidied up and headed over to Adrenalin Forest, a high ropes course. There are 7 levels of difficulty, which get higher and harder (more strength and stamina) and 2 of the girls and I made it to level 6 - but were too tired to continue to the final level. I have to admit I was very tired and sore the next few days. But keen to return and finish off the final level - it was pretty fun - lots of flying foxes! Sorry I was too busy having fun to take any photos of the weekend.
Posted by Helen at 9:23 PM No comments:

After several years of undertaking various courses (Outdoor First Aid, Risk Management, Bush Skills) through the Mountain Safety Council, and submitting a log book of my trips for the last 5 years and going through a workbook - it was finally time for me to do the Outdoor Leader assessment. This involved 5 of us going into the hills with an assessor and showing that we know what to do. It all went fine - we had great weather and it was all pretty easy - so officially I'm now allowed to take the rangers out tramping in the hills.

On the Sunday I did the River Safety course. The weather was pouring with rain, but I guess it didn't really matter as we were getting wet anyway. After all the rain the previous night the river level was pretty high and flowing pretty fast - which meant it was quite strong. We practised crossing the river using various methods and numbers of people, and what to do if you fall in.

Back steps are done

I finally managed to finish the back steps. I came up with an assembly line approach to help get them done. I was in a bit of a hurry because next weekend is our annual Thanksgiving party.

The steps are two different colours because I ran out of left over Vitex decking from the back deck. I finished it using the old deck that was dismantled when we renovated two years ago. It looks a bit funny, but new Vitex was going to cost quite a bit and I like the idea of reusing the old timber.


The strawberries are coming along nicely and there are lots of pots on the deck.


The citrus trees now have boarders around them to keep me from getting them with the edger.

The last post didn't have any pictures of the veggie garden so here they are.

This past week we had some amazing weather. Most evenings I would come home from work and have to open up the house to get it to cool off.

Since it was so nice I thought I would take a few photos to record how the house and garden are progressing.

Our good friends' son Thomas had his third birthday recently. Helen made this amazing cake. It looked so impressive I had to take a photo of it.

We have been having a relaxed October, spending most weekends around the house and catching up on the garden and chores. The garden is growing like crazy with the rain and some warm, sunny days - will post some photos soon. Aaron has been recovering well from an unexpected operation. He is back on his bike and trying to get his fitness back. Hope to be out and about doing something a little more adventurous soon.
Posted by Helen at 9:51 PM No comments:

Side steps are finally done

I spent the weekend working on the side steps. I think they are finally finished. I started working on them just over a year ago here. The only thing I have left is to get a bag of small rocks to fill the gap between the steps and the house.

I added a skirting board on the fence side to help keep unwanted rocks and weeds from coming through from the other side.


Elsewhere in the garden, Helen's rhubarb has gone completely mental.